On the HVB Tower, a city landmark which is currently being converted into a green building, in February 2015 Philipp Geist realised a seven-day large-scale video/light art installation projected directly onto the tower’s impressive facade to display huge, poetic light art paintings.

Geist develops imagery that make the topics of ecology, nature and sustainability more tangible. One big unifying theme is the colour green, which dominates the designs. This transforms the whole building into something completely new, making it glow and pulsate. Colours and shapes emerge to form new compositions. Everything is in flux, and visitors can give free rein to their associations: is the building a water tank, with pipes running up the façade? Then suddenly it flashes alarmingly, parts of the building disappear, and shortly afterwards it turns into abstract forms. Or is it perhaps a forest of leaves, a sea of flowers?

Elements of the façade are traced, enhanced or completely reinterpreted. Components disappear and the total surface of the façade begins to warp and move. The result is an interplay between the reality of the building and the artistic fiction of the projection. The viewer's perception of two- and three-dimensionality is challenged. Picture elements, such as growing flowers and organic elements, growing trees, growing grass and plants are artistically integrated. Geometric, spatial shapes like squares, cubes, perforated planes, lines and beams overlap in a continuous process to build an overall picture. only to dissolve again in the next moment. The effect is of a complex pictorial architecture that is constantly in flux, and picture compositions that are partly minimally purist, sometimes colourfully intense, dreamlike, fragile and unreal.

The title GREEN BUILDING emphasizes the building’s ecological transformation into a green building. Only green electricity is used for the installation. Visitors are not only invited to form their own ideas and see new connections, but also to submit their own words and content on the themes of ecology, environment, sustainability and environmental protection. The imagery Geist creates grows and changes over the entire twelve-day period. The speed of the installation is adjusted to the situation in the busy street. Visitors who come often always see new compositions, making the installation a visual magnet for Munich and visitors to the city over its entire duration.

The Berlin artist Philipp Geist (1976) works internationally as an artist with the mediums of video/light installation, photography and painting.

In 2014, during the Year of Germany in Brazil 2013/2014, he developed a contiguous video installation on the universally recognised statue of Christ the Redeemer in Rio de Janeiro and projected it large-scale onto the Santa Marta favela. In November to mark the 25th anniversary of the fall of the Berlin wall he implemented a light art installation at the German Embassy in Prague and at the Bauhaus museum in Dessau in early September 2014. On 16 May 2013 Geist received the German Lighting Design Award in the category of Light Art for his installation ‘Time Drifts’ at the Luminale 2012. In July/August 2013, Geist developed an installation at the new City Hall in Bayreuth over 40 days to mark the 200th anniversary of the birth of Richard Wagner. Currently his work in is on display until November as part of the Scheinwerfer II group exhibition at the Kunstmuseum Celle and from November in Vaduz in Liechtenstein. In December 2009 he recorded a video installation on the facade of the Throne Hall in Bangkok over nine days to mark King Bhumibol of Thailand’s 82nd birthday. The installation was visited by 2.5 million visitors. 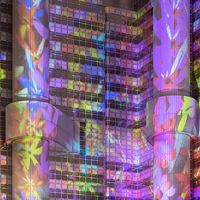 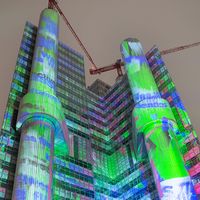 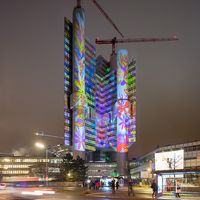 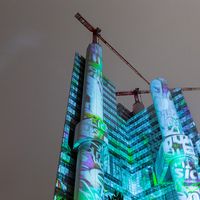 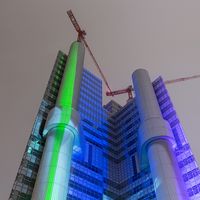 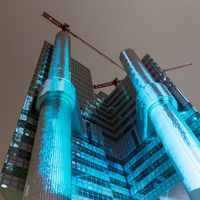 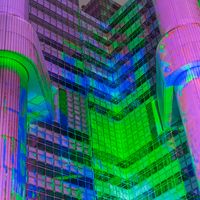 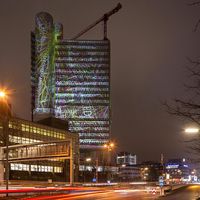